The Importance of Touch in Early Child Development 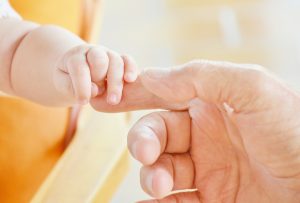 Did you know that our sense of touch is controlled by a huge network of nerve endings and touch receptors in the skin known as the somatosensory system?

This system is responsible for all the sensations that we feel.
It is made up of a complex system of sensory neurons and pathways that send messages to the brain, in response to changes taking place on our bodies surface.

The brain does not respond to all of the somatosensory system in the same way. It is highly sensitive to touch sensations in the face (lips and tongue), hands and feet as they contain far more fine touch receptors than other areas of the body.

David Linden, a Neurobiologist at Johns Hopkins University, highlights the importance of touch for a baby’s development in his book Touch: The Science of Hand, Heart, and Mind.

“The best examples of this come from Romanian orphanages after Ceaușescu’s fall, when there just weren’t enough people around to take care of babies. They were barely touched during the day,” Linden says.
“These kids didn’t just have a host of emotional problems — though they were depressed and had high instances of schizophrenia, bipolar disorder, and other issues — but they also had a whole raft of physical ailments. They had weakened immune systems, and skin ailments.”

“Other research has confirmed this phenomenon. We’re not entirely sure why it happens, but it seems that early touch experience is extraordinarily important for development of both cognitive function and a healthy body.”

“This is why, nowadays, when premature infants are born and put in isolators, they’re taken out for a few hours a day, and pressed against a parent’s skin.”

A study carried out by University College London in 2013, also found that touch increases the brain’s ability to construct a sense of body ownership and plays a big part in creating and sustaining a healthy sense of self.

Tactile elements are sometimes missing from Sensory Room designs. Vast, multi-wall projections and sound systems can be fantastic for visual and auditory stimulation, but they do nothing for our touch receptors.

We have some exciting new products and Sensory Room packages on the horizon!